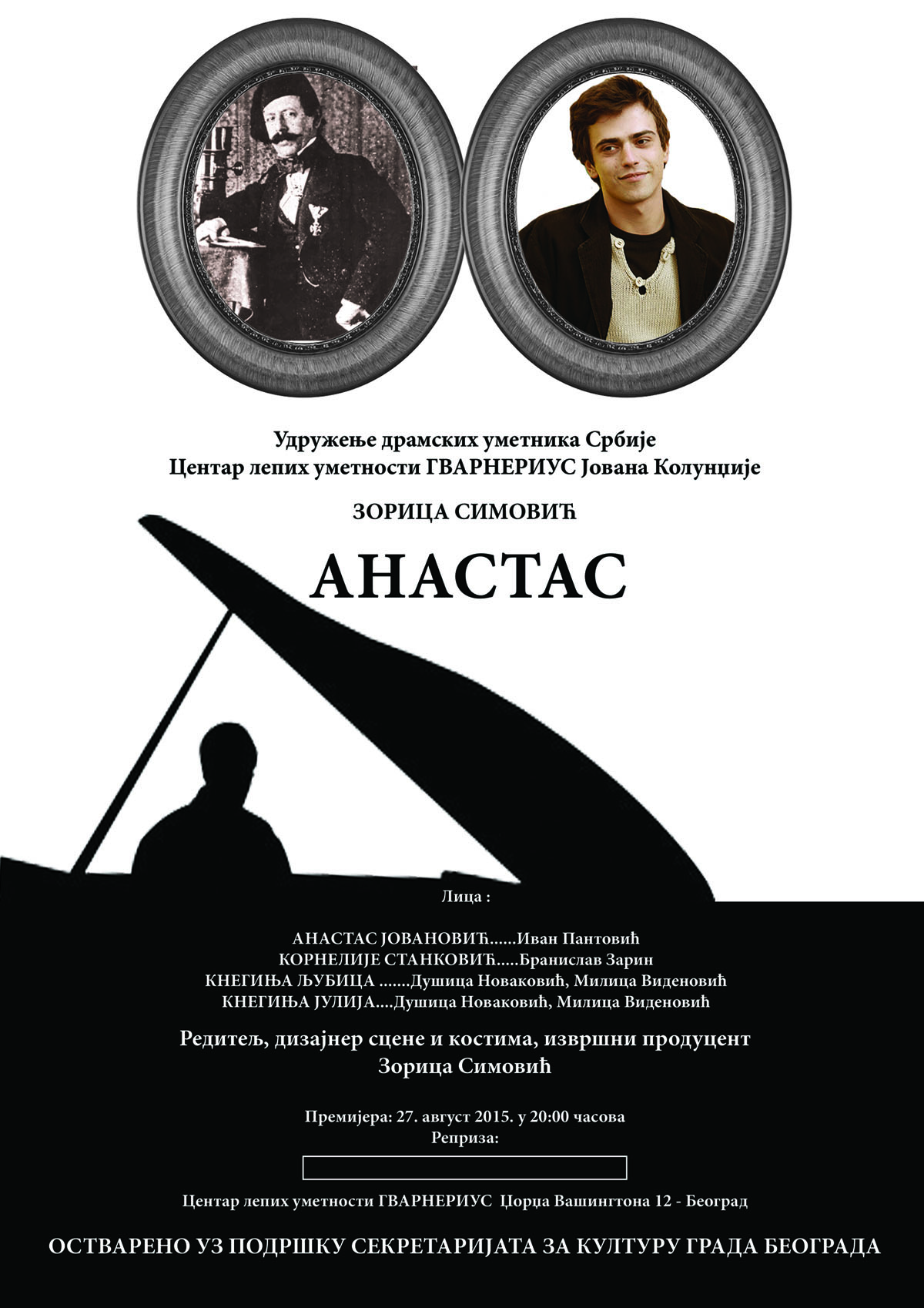 Theatre play ANASTAS is a duodrama with three performers in which one character speaks, the other one plays, and the third one sings.

The main hero is Anastas Jovanovic, the first Serbian photographer and a personal photographer of Prince Mihailo Obrenović (the son of Miloš Obrenović I, Prince of Serbia), who was also the Chief of Prince Mihailo’s cabinet. In this play, he exposes to musician Kornelije Stankovic, his personal drama which is related to events at the Obrenovic dinasty court. The light-motif of the play, is unraveling the secrets of a song “Why my thoughts are battling”, written by Prince Mihailo and composed by Kornelije Stankovic.

This play reveals the 19th century Belgrade, personal relationships between members of the ruling family, as well as the international status of  Serbia at the time, all this seen by the eyes of a person in the shadow, who is dealing with himself in this play, reviewing his role and responsibility in past events.

The character of Anastas Jovanović will be interpeted by the young actor IVAN PANTOVIĆ, the character of Kornerilje Stankovic – musician BRANISLAV ZARIN, and Ljubica Obrenovic and Juliet Obrenovic (singing only) – actress DUŠICA NOVAKOVIĆ.

Project is supported by the Secretariat of Culture of Belgrade, in partnership of the Association of Drama Artists of Serbia and GUARNERIUS, Art Centre of Jovan Kolundzija.

The play speaks about  less known details, anecdotes and historical facts related to the subject. It brings luxurious colors of that time, exposes many levels of private court life, the atmosphere of  Belgrade in that time, as well as a rich Viennese Obrenovic biography …

The central motif is unraveling the secrets of a song, the song “Why my thoughts are battling” written by Prince Mihailo and composed by Kornelije Stankovic. The later interpretations of the song is related to a forbidden love for Catherine, Mihailo close relatives.

However, the play is disproving these thesis, stating facts about the date when the composer got the permission from Prince to compose it (which was on May 13th 1861, when Catherine was a child and Mihailo was married to Julia for seven years).

Anastas Jovanović was Mihailo’s best friend, the Chief of Prince Mihailo’s cabinet, a man from the shadow who knew so much. Actually, the play presents Mihailo’s personal drama from the perspective of someone who loved him, but could not protect him from suffering and premature death.

The audience will also have the opportunity to find out the circumstances under which occured  the verses of Njegoš ” the character of woman is a funny job” and with which person he has been inspired, most likely.

This performance is an autonomous artistic act, and also a history lesson.

Anastas Jovanovic already as child was by destiniy connected to family  Obrenovic and the play exposes many interesting details about the dynasty, but also will reveal numerous prejudices.

One of prejudice often questioned by theater historians – who persuaded the Prince to build the first theater building in Kragujevac. He did not need persuasion because Milos, as a young man, has already seen Dubrovnik, Zadar, Trieste and Venice, lived in Vienna for two decades, and was one of the richest men in Europe at the time… He bought Berat of the inheritance of the prince title from the Sultan for two hundred kilograms of gold ….